As the biology section of Big Island Farms, we have taken this week to study volcanoes of the islands of Hawaii. By seeking to inform and express what we’ve learned, we’ve included below a timeline of the 5 main volcanoes of the Big Island; Mauna Loa, Kilauea, Mauna Kea, Kohala and Hualalai. Also included is a brief account of the Hawaiian cultural significance of volcano. As a classroom we have spent time discussing exploring as well as expanding our appreciation for the natural occurrences that result from the process of volcanic lives.

The Big Island began forming one million years ago, making it the youngest of the Hawaiian islands. The Island is made of five volcanoes that overlap to form land. The oldest volcano is Kohala, which was created one million years ago and last erupted 120,000 years ago. After its last eruption, the northern part of the volcano fell into the ocean and created a large landslide that caused a massive tsunami, reaching over 1,600 feet high. Kohala is the only one of the five volcanoes that was established during the reversal of the earth’s magnetic fields, which was preserved and recorded in the way the lava flowed and cooled. Mauna Kea formed 0.8 million years ago and is the tallest mountain in the world. The mountain starts below sea level because the heavy island creates a depression on the ocean floor, making it taller than Mt. Everest. Hualalai is located near the Kona International Airport and is still active, but its last eruption was in 1801. Hualalai rose above sea level 300,000 years ago, and has been inhabited by Hawaiians since the earliest recordings of their history. Mauna Loa covers half of the island and is the largest volcano on earth based on mass. It is also one of the most active volcanoes, and the last eruption in 1984 came within 4.5 miles of Hilo. Kilauea is the newest volcano on the island, and has been continuously erupting since 1983.

After a new flow of lava moves through an area and cools, for example the current flow from Kilauea, a new terrestrial substrate is formed that can then be colonized by plant life. The organisms that move into such an area first would be algaes, lichens, mosses, and ferns. The reason for this is that these types of organisms need much less substrate and soil to anchor to, as well as having a much lower basal nutrient need than larger, more advanced plant life. Also, many of these organisms’ spores are airborne, so they can colonize a new area from afar. After these basic organisms have began to colonize, more advanced trees and shrubs can begin to take hold. As tree saplings begin to grow they form canopies that shade the ground, keeping other new saplings from emerging from the undergrowth. Many times, the undergrowth consists of mostly ferns, which also resist new woody growth. After the undergrowth is established, diversity increases and a mature rainforest is completed. This rainforest, formed on new lava rock, can stay vigorous for up to 400 years. This process, in the modern era, does not always run so smoothly. Human interference is the main cause of disruption during this process. Invasive species are sometimes planted because they are more aesthetically pleasing. Also, some of these new flow areas are converted to golf courses, in which case much of the new growth is chopped or mowed away.

On the south flank of the Kilauea volcano, lies a 4,760 cubic mile slump known as, the Hilina Slump. When a coherent mass of loose sediments and rock layers move a short distance down a slope, a slump is formed. Kilauea has altering subaerial and submarine lava flows that are interbedded with weaker rocks and sediments. This resulted in the fractured rock mass of the Hilina Slump. The slump is currently moving seward at about 10 cm per year. On November 29, 1975 a 7.2 magnitude earthquake occurred, which caused a 48 foot tsunami and moved a 37 mile wide section of the Hilina Slump to drop 11 ft and 26 ft towards the ocean. On May 4th, 2018 moving magma caused a 6.9 earthquake that caused the slump to move 2 ft seaward. If the entire slump were to fall into the ocean, scientists predict that a 9 magnitude earthquake would result along with a megatsunami. Slumps, like this one, have been shown to occur on other Hawaiian Islands. Systematic mapping of the seafloor in the 1980’s showed 17 areas that appeared to be remnants of large landslides from the older hawaiian islands. These landslides have been shown to have created mega tsunamis over 110,000 years ago. Luckily, a repeat of this event is extremely unlikely and may take thousands of years to ever occur again.

Pele, the ancient Hawaiian goddess of fire, lightning, wind, and dance. She is a prominent Hawaiian goddess whose legends lays the foundation of the creation and natural rule of the Hawaiian Islands. According to folklore, her spirit resides in the Halema’uma’u crater and embodies the now erupting volcano, Kilauea. Her origin story goes as followed:

The creation of Hawaii began when Pele left Tahiti. Pele is renowned for her passionate and fiery temperament, and was sent away by her father due to her temper and attempting to seduce her sisters husband. A well known story entails that Pele’s older brother, Kamohoalii, the king of Sharks, gave her a canoe which she used to escape to Hawaii. The first Island she landed on was Kauai, where she was attacked by her sister Namakaokahai and was thought to have died. However, Pele survived and moved on to Oahu where she created the “fire pit” including the crater, Diamond Head, that is presently located in Honolulu. Next, she traveled through Molokai and then Maui to leave her mark. Now, Pele’s sister realized that she hadn’t died, so she traveled to Maui to create the Haleakala volcano.

However, once Pele’s sister discovered Pele had survived, the two goddesses battled again near Hana where Pele was torn apart. Her spirit was then moved to Mauna Kea on the Big Island of Hawaii to lay to rest and is where Pele’s strength and spirit will reside for eternity. Her bones are now referred to as Ka-iwi-o-Pele.

Other stories of Pele light up ancient Hawaiian legends and her creation story is greatly debated. However, Pele’s powers are universally recognized and any volcanic eruption in Hawaii is attributed to the goddess.

Today, molten lava and toxic gases are continuing to flow out of Hawaii’s Kilauea volcano. The lava is known as kinolau and is believed to be a physical embodiment of Pele. Actions that disrupt the lava or its flow, such as poking lava with sticks or trying to reroute the lava’s path, is seen as disrespectful to the goddess. Due to Pele’s destructive and unpredictable temperament, Hawaiians have traditionally left her gifts and offerings to please her and remain in her good graces. These types of traditions continue today and are exemplified as the native Hawaiians leave Ti leaves by their homes to keep them safe in the wake of the newest volcanic eruptions.

In response to the volcanic activity, the Hawaiian Civil defense has release statements reporting at least 35 structures have been destroyed and dozens of fissures, that release toxic gases, have been formed. On June 2nd, the lava from the eruption of fissure 8 entered Green Lake, the largest freshwater lake, and boiled away its water in a matter of hours. Over 30 billion gallons of bubbling lava have poured from the Kilauea. Although the volcanic activity does threaten the tourist industry of the Big Island, for natives, it is simply a reminder of Pele’s power and that we are all a guest on her Island.

Although this week was abnormal due to our camping trip,[...] 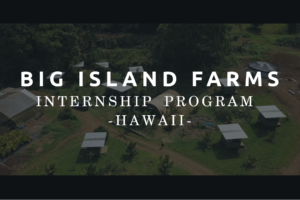 Big Island Farms internships is about building a sustainable lifestyle[...] 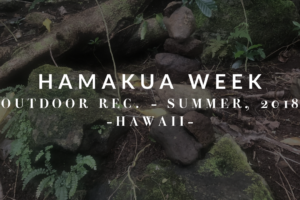 Monday: Today was a busy day preparing everyone for the[...]